Speed Up Mac and iOS Typing with Text Expansion

Speed Up Mac and iOS Typing with Text Expansion

With all the advances in computing and communications, it’s amazing that—after nearly 150 years!—we still use the keyboard layout from the world’s first practical typewriter for entering text into our computers, smartphones, and tablets. But we haven’t improved as typists, nor do we enjoy typing more—if anything, we increasingly abbreviate to avoid typing, hence “CUL8R.” Text messaging aside, wouldn’t it be nice to be able to type less without compromising meaning or making your text look like it was composed by a teenager? Thanks to text expansion features built into OS X and iOS, and extended with third-party utilities, you can.

For basic text expansion capabilities in OS X, look in System Preferences > Keyboard > Text, and in iOS 9, go to Settings > General > Keyboard > Text Replacement. For both, you can enter a phrase, and a shortcut that expands into that phrase when typed and followed by a space or punctuation character. (Tip: If text expansion doesn’t work in a Mac app like Mail or Safari, make sure Edit > Substitutions > Text Replacement is selected.)

If you’re signed into the same iCloud account on both your Mac and your iPhone, for instance, the text expansions sync between them automatically. So, you can type omw and tap the Space bar to get “On my way!” typed out for you, regardless of what device you’re using. (Another tip: don’t create abbreviations that you’ll also want to type normally. It might seem like a good idea to use mm for “Martin Marietta,” but that will get in the way of talking about 35mm film.) 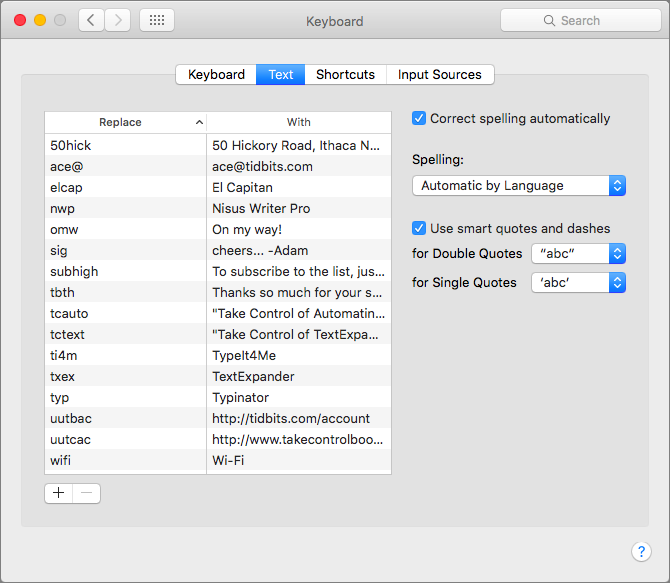 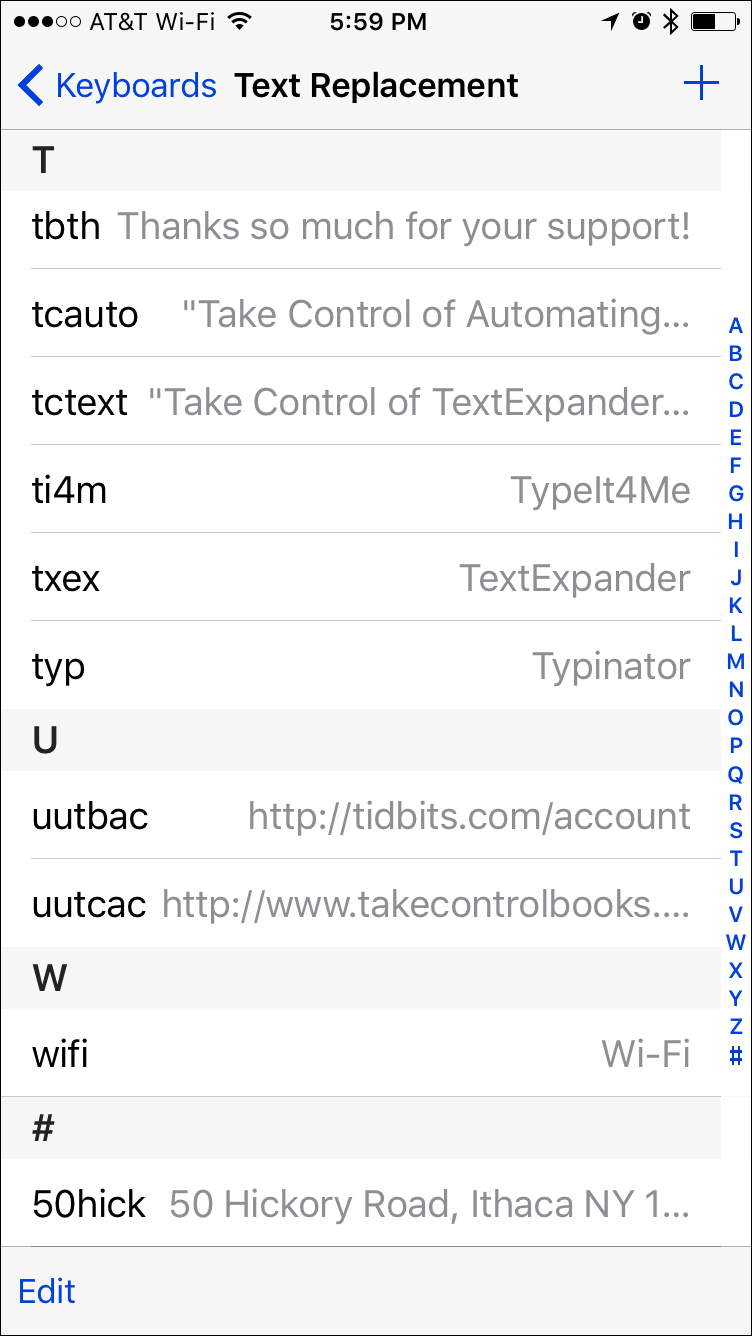 With such a useful feature built into OS X and iOS, why would you want to spend money on a third-party utility, like TextExpander (Mac and iOS), Typinator (Mac), or TypeIt4Me (Mac)? Unfortunately, OS X’s text expansion feature doesn’t work in all apps (it likely won’t work if the app lacks the Edit > Substitutions > Text Replacement menu command). The interface for creating new substitutions is cramped and hard to work with, you can’t configure the trigger characters that cause abbreviations to expand, and you can’t include text with styles, variable text like the date, or even graphics.

That’s where text expansion utilities shine. They can include styled text and graphics in expansions, insert the current date and time, respect case when expanding abbreviations, include the contents of the clipboard in expanded text, automatically fix common typos, create fill-in-the-blanks snippets that you customize on each expansion, and much more.

Here are some ideas for the kinds of things you might want to turn over to your computer for typing:

So think about what bit of text you might want expand automatically and give text expansion a try today!